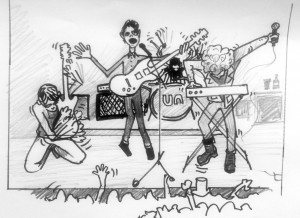 Those Unfortunates are a fourpiece who write songs that aim for the wit and warmth of The Kinks and Television Personalities.
They are self-deprecating, for the most part, and self-contained. They sound harder than they sound.

Their first single, “Arthur Lowe” is a nonsense song about the comic character actor, Arthur Lowe. It bolts off at a hundred miles an hour, looting gleefully from the best bits of Buzzcocks’ Boredom, The Owl and The Pussycat and Noel Coward, before it arrives, gears grinding, at a premature conclusion. A nod and a wink, and it’s gone.

Their second single, “I wish that I could smile like Malcolm” is a riotous tribute to “If…” and “O Lucky Man” actor McDowell,  released on his birthday, 13th June.

Their third single, “Those Unfortunates We Are”, is a riotous tribute to themselves. They released “Smiley”, a free download single, on Christmas Day 2016, and their debut album, “Nothing Isn’t Beautiful” will follow in 2017.

Those Unfortunates have received airplay on BBC 6 Music from several DJs, including Gideon Coe and Steve Lamacq; with Tom Robinson describing them as ‘daft and irresistible… [with] the lightness of touch and complete assurance found among all genuine Great British Eccentrics.’

Walk Upright write timeless, tousled, pop music that touches on the ire of Mclusky, the Hammond-organ hookiness of Attractions-era Costello, and Pavement’s sense of mischief, but maintains an emotional directness that’s unmistakably their own.

“No Control” is one man’s howl of frustration, an accidental riposte to hollow state-of-the-nation punk-rock posturing, played out over two-and-a-half-minutes of squally glam-soul. London burns on a television screen, effigies topple into the sea, and a man slumps on a sofa, rendered inert by his own demons, watching his frustrations bubble over.

This isn’t a paean to prescription drugs, nor a conventional call to arms: it’s more complicated than that, more honest, and umpteen times more exciting.

This is Walk Upright’s debut release, but in preparation they have co-promoted a regular night – Life at the Top – with Those Unfortunates, and performed in East Germany, East Lancashire and London (all four corners).